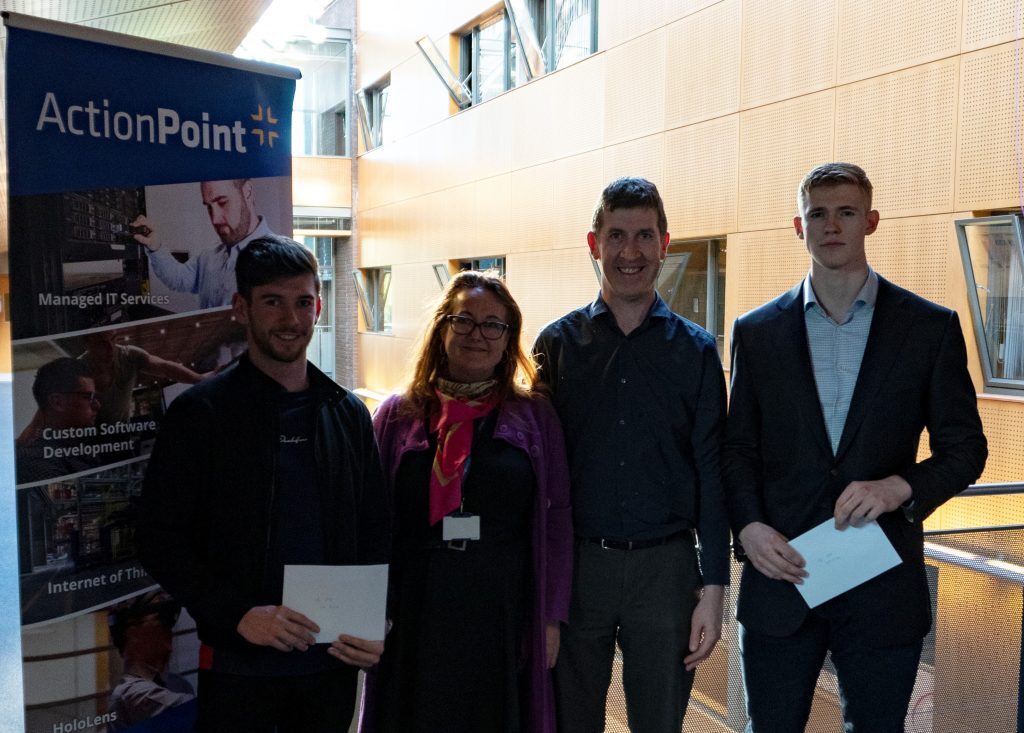 Limerick, Monday 1st April 2019 – Limerick-based Tech Firm ActionPoint today awarded Computer Systems student Colm Le Gear first prize in its annual FYP competition in conjunction with the University of Limerick. The award, which has been running since 2014, looks for excellence and innovation in computer science final year projects, and is open to nominated 4th year students of Computer Science and Information Systems (CSIS) degrees at UL.

A total prize pot of €1,000 is shared between 1st and 2nd place, following evaluation from a seven-judge panel made up of senior members of ActionPoint’s engineering team.

The competition has long been a source of high-quality graduate placements for ActionPoint, which provides IT services and custom software to key companies across multiple sectors, including the likes of Chill Insurance, Munster Rugby, and the Department of Foreign Affairs and Trade. ActionPoint delivered the online passport renewal project for the Department in 2017, which has recently been extended to include online child renewals.

Colm Le Gear’s FYP was a ‘Lecture Sign-in System’ for use in university lectures, utilising facial recognition to verify a student’s identity. The project was commended by ActionPoint’s judges because of the “seamless nature that technologies were brought together”. The judging panel were also impressed with Colm’s “understanding of modern coding technologies and how modern architecture methods would be best employed”. Jamie MacManus claimed 2nd prize for his project ‘Leduc Hold’em using Reinforcement Learning’.

ActionPoint was founded in 2005 by UL CSIS graduates John Savage and David Jeffreys, who were both awarded the prestigious UL Alumni award in Autumn of 2017. John Savage, ActionPoint co-founder and CTO has fond memories of his own FYP, having developed an open framework for VR which won national awards from HP and Accenture, as well as the QAD Design Competition. John went on to win the President’s Gold Medal in 2001.

FYP recognition was instrumental in the formation of ActionPoint, and so Savage was motivated to support the university and students through the FYP Award. Speaking about the initiative, Savage said; “We have very close ties to the University, as graduates ourselves, and of course, we are located on campus, only a stones-throw away from the CSIS building. Over the past decade we’ve grown to 100 employees and throughout that time UL has been a talent hub that is hugely important to our strategic success. We’re very happy to help engage and support engineers of the future through our FYP competition.”

Headquartered in Limerick, ActionPoint currently employs 100 people. The company recently announced details of a UK expansion, and now has offices in Limerick, Dublin, Galway, Cork, Lisburn and the US. ActionPoint is a Microsoft Gold Partner, Dell Country Partner of the Year 2014 and 2016 and has won the Deloitte Fast 50 award for the past five years in a row. ActionPoint were also recently awarded Deloitte Best Managed company status for the third year running.